THIS PAGE IS PART 2


PART 2 AT.......http://organicsynthesisinternational.blogspot.in/p/gliptin-series-22.html
will be updated 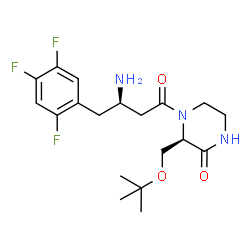 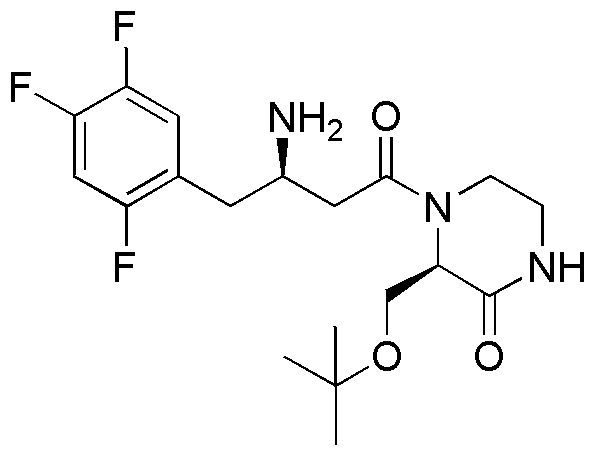 Korea Patent Publication No. 2008-0094604 the call to the scheme, as indicated by A Ⅰ) of formula (II) beta-compound of formula 3 is already substituted heterocyclic compound having 1-hydroxy-benzotriazole group (HOBT) 1-ethyl-3- (3-dimethylaminopropyl) carbodiimide (EDC) and reacting with a tertiary amine to prepare a compound of formula (4) connected by peptide bonds; Ⅱ) beta comprises the step of reacting under acidic conditions a compound of the formula (4) – a method of manufacturing the heterocyclic compounds of the formula I having an amino group is disclosed.
- Scheme A] 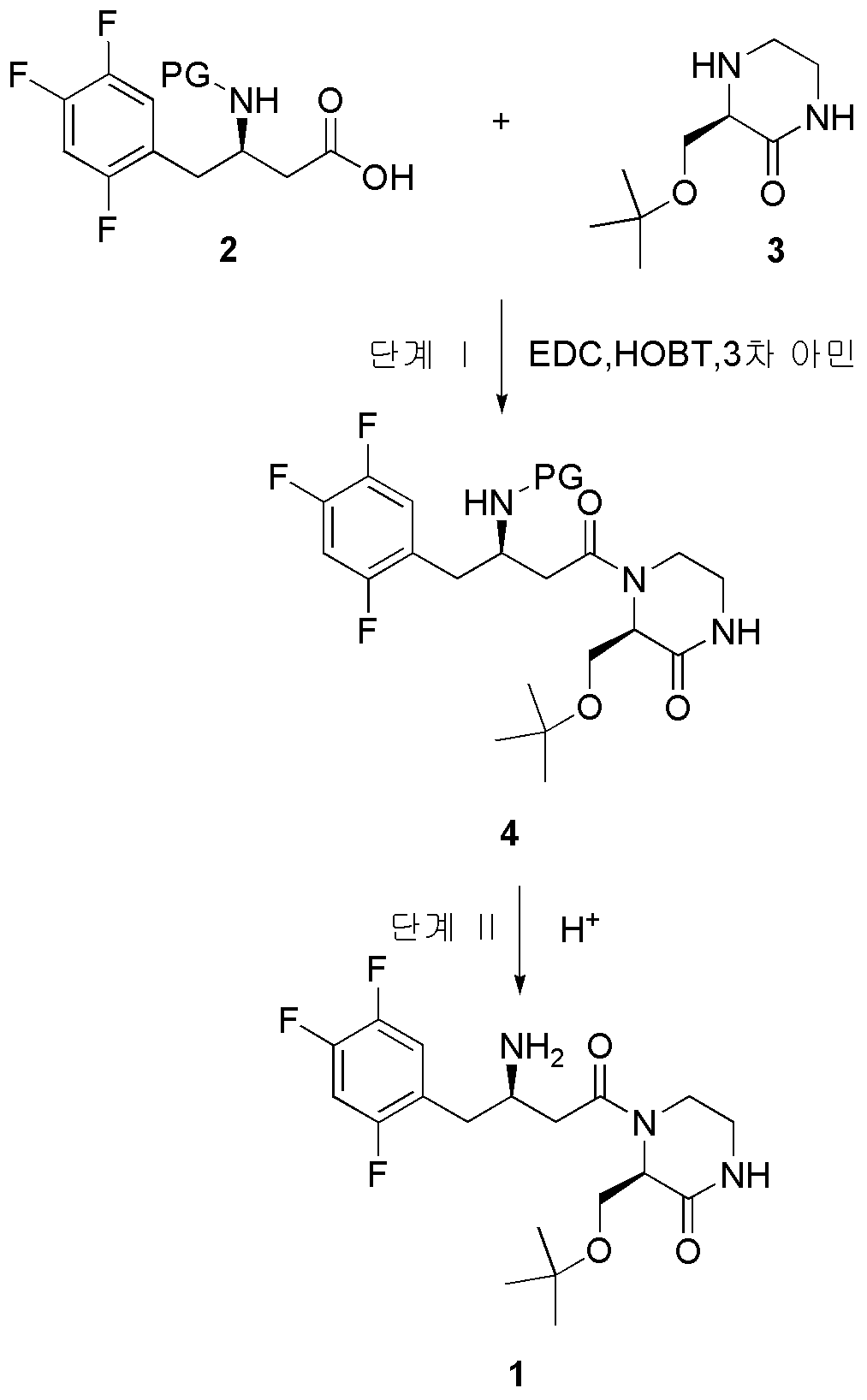 Specifically, (2S) – (+) – 2,5- dihydro-3,6-dimethoxy-2-isopropyl-pyrazine 2,4,5-trifluoro-react with benzyl bromide and acid treatment, and then the amine an ester compound obtained by the protection reaction. Ester compounds are hydrolyzed to re-3- (2,4,5-trifluoro-phenyl) -2-amino-propionic acid tert such as isobutyl chloroformate, triethylamine or diisopropylethylamine to give the amine, and then using diazomethane to form a diazo ketone, and then may be prepared by reaction with silver benzoate. However, the reaction can be performed at low temperature (-78 ℃) or high alpha-amino acid to purchase and use, and may have a risk of problems such as the need to use large diazomethane.

To a different process for preparing a compound of Formula 2 as shown in scheme Tetrahedron: Asymmetry 2006; It is known in 2622; 205 or similarly Bioorganic & Medicinal Chemistry Letters 2007.

That is, a 1,1′-carbonyl-2,4,5 which the phenyl trifluoroacetic acid activated using the following imidazole mono-methyl words potassium carbonate is reacted with the beta-keto ester compound is prepared. This produced an enamine ester using ammonium acetate and ammonium solution, the ester compound chloro (1,5-cyclooctadiene) rhodium (I) dimer using a chiral ferrocenyl ligands I the reaction of the high-pressure hydrogen with a chiral primary amine with a beta-amino ester compound after production and can lead to hydrolysis to prepare a compound of formula (2). However, use of expensive metal catalyst has a problem that must be performed in high pressure hydrogenation.

The method for preparing a compound of Formula 2 is disclosed in International Publication No. WO 04/87650. 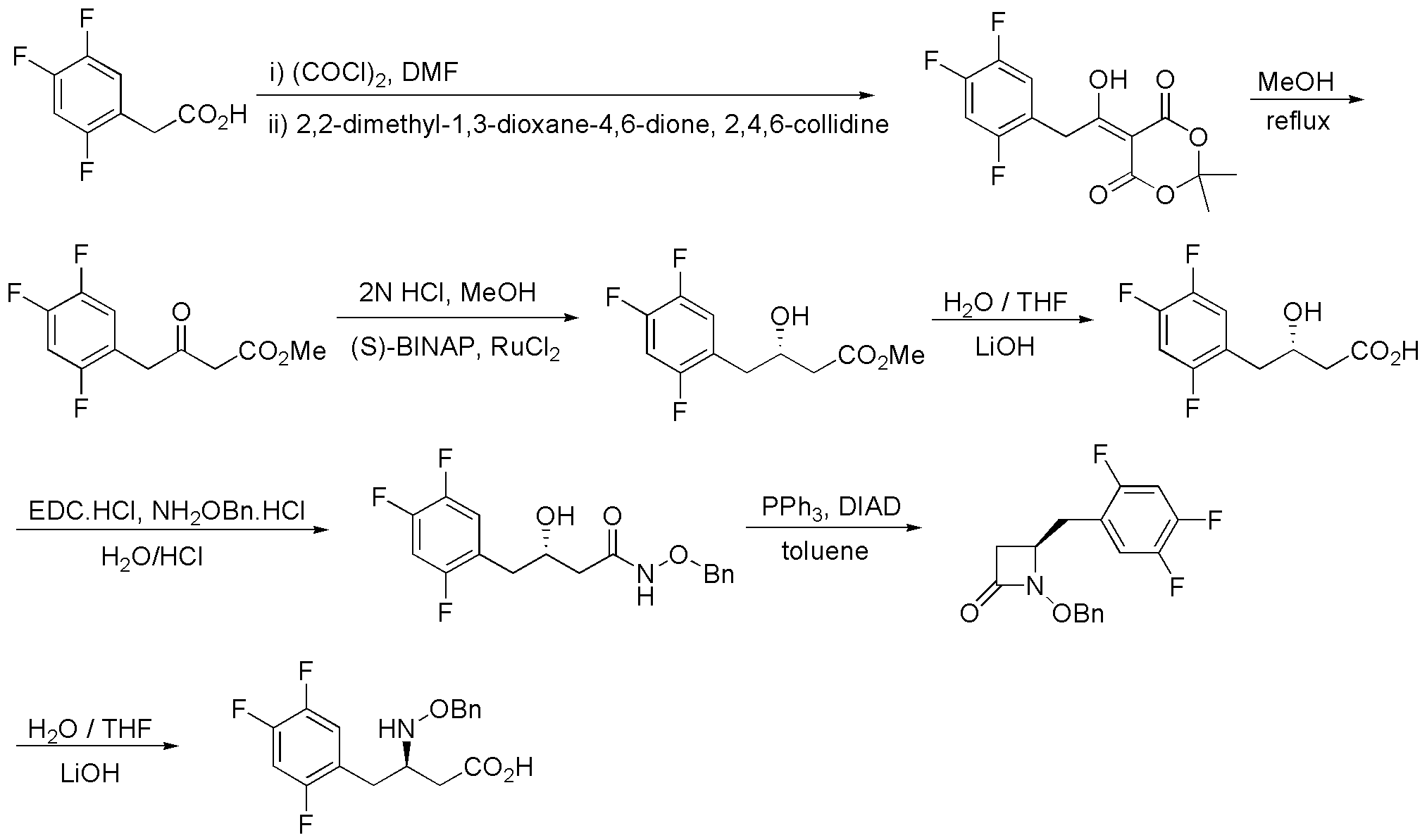 Specifically, 2,4,5-fluorophenyl reagent is oxalyl chloride, the acid activated acid with 2,2-dimethyl-1,3-dioxane-4,6-dione, and after the reaction of methanol and the resulting material at reflux to prepare a corresponding compound. With a selective reducing reagents which enantiomers (S) -BINAP-RuCl 2 and hydrogen through a reaction (S) – producing a compound having coordinated to each other, it again after the decomposition, and the singer O- benzyl hydroxyl amine and the coupling reaction and the intermediate is prepared. To do this, the resulting intermediate tree azodicarboxylate and diisopropyl azodicarboxylate presence ring condensation reaction, treated with an aqueous solution of lithium hydroxide to (R) – while having the formula (II) coordinated to the amine group protected with a benzyl-O- the compound can be produced. However, the method has a problem as a whole to be prepared by the reaction yield to be low and a long processing time to perform the reaction.

Thus, the conventional known method for producing a compound of the general formula (2) has the disadvantage of using expensive reagents, or not suitable for commercial mass-production method by a long synthesis time yield is also low.

In addition, the compound represented by General Formula (3), as described in Korea Patent Publication No. 2008-0094604 call, can be prepared by way of reaction schemes.

Specifically, the starting material D- serine methyl ester is substituted by a hydroxy group when reflux again substituted by trityl chloride as methoxy groups converted to the aziridine compound.
[Scheme 3] 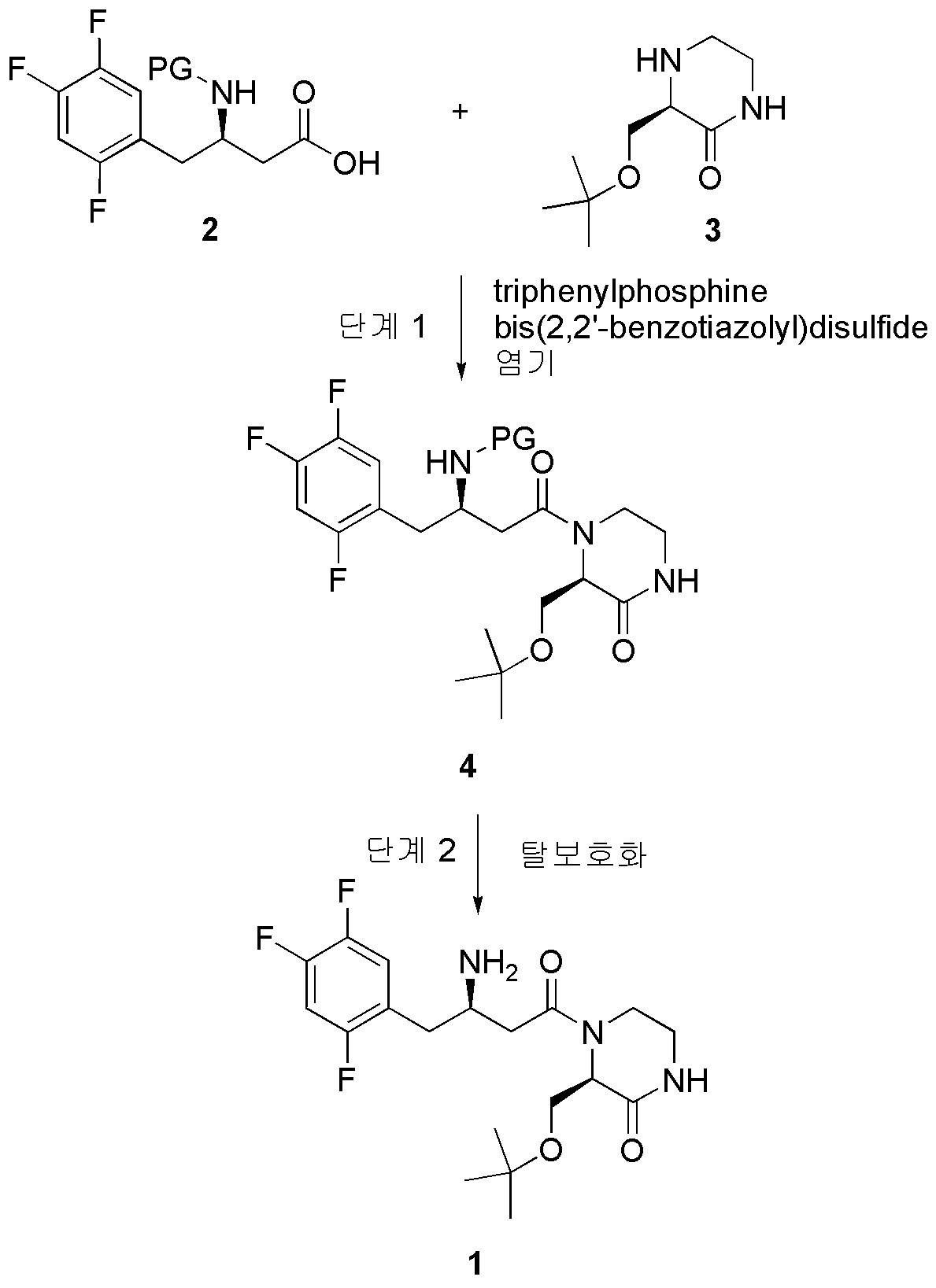 A series of β-amino amide containing substituted piperazine-2-one derivatives was synthesized and evaluated as inhibitors of dipeptidyl pepdidase-4 (DPP-4) for the treatment of type 2 diabetes. As results of intensive SAR study of the series, (R)-4-[(R)-3-amino-4-(2,4,5-trifluorophenyl)-butanoyl]-3-(t-butoxymethyl)-piperazin-2-one (DA-1229) displayed potent DPP-4 inhibition pattern in several animal models, was selected for clinical development.

About evogliptin tartrate tablets
Evogliptin tartrate tablets is a dipeptidyl peptidase IV inhibitor, in tablet form. Evogliptin tartrate
tablets is expected to be approved for the treatment of type 2 diabetes mellitus. The Group holds
an exclusive intellectual property licence from Dong-A Pharmaceutical Co. Ltd. to develop
and commercialise evogliptin tartrate tablets in China, including the exclusive right to develop
evogliptin tartrate tablets for manufacturing and sale in the Group’s name. The new drug certificate
to be issued by the CFDA will be approved and registered under the Group’s name.
Evogliptin is a patented new molecular entity in the United States and other international markets.
Evogliptin tartrate tablets is being concurrently developed by Dong-A Pharmaceutical Co. Ltd.
for the Korean market. Based on information released from a multi-centre, phase II, randomised,
double-blind, placebo-controlled, therapeutic exploratory clinical trial conducted in Korea by
Dong-A Pharmaceutical Co. Ltd. to investigate the efficacy and safety of evogliptin, evogliptin
was proven to be effective in significantly lowering blood glucose levels in patients with type
2 diabetes. Data also show that the body weights of patients remain stable over the treatment
period. In addition, evogliptin was proven to be safe and well tolerated with no severe adverse
drug reactions observed during those phase II clinical trials. The Company believes evogliptin
tartrate tablets will help reduce the burden of patients with moderate-to-severe renal impairment
as pharmacokinetic study in animal model and healthy human volunteers showed low renal
elimination.
2
According to the statistics of IMS Health Incorporated, the market size of products for the
treatment of diabetes in China in 2013 was approximately RMB7.8 billion, and grew at a
compound annual growth rate of 23.4% from 2011 to 2013.
http://www.luye.cn/en/uploads//2014-07/21/_1405936452_zr21xh.pdf


Dong-A ST
SEOUL, SOUTH KOREA
14 April 2015 – 5:45pm
Oh Seung-mock
Dong-A ST has licensed its new diabetes drug Evogliptin to 17 Latin American countries including Mexico, Venezuela, Argentina, Chile, Colombia, Ecuador, Peru, the Dominican Republic, and Uruguay, Jung Jae-wook, Dong-A ST’s PR manager, told Business Korea.
Dong-A ST and Eurofarma, a Brazilian pharmaceutical company, concluded the licensing contract at Dong-A ST’s headquarters on April 13 in Seoul.
Eurofarma will be responsible for Evogliptin’s product development and sales in the 17 Latin American countries, Dong-A ST said. Dong-A ST will receive royalties from Eurofarma, and export the raw material of the medicine.
Dong-A ST has been developing Evogliptin with the support of the Ministry of Health & Welfare of South Korea as an innovative new medicine research project since May 2008. Evogliptin is a DPP-4 remedy based on the inhibition mechanism which is “excellent” at reducing blood sugar, whilst “less likely” to cause weight increases and hypoglycemia, the company said.
Park Chan-il, president of Dong-A ST, said that Dong-A ST will pursue further out-licensing “over the globe,” through continuous investment in research and development.
Maurizio Billi, Eurofarma’s president, wished to expand both companies’ partnership in the innovative new remedy development sector, according to Dong-A ST.
Last July, Dong-A ST and Eurofarma concluded a contract out-licensing Evogliptin to Brazil itself, the company said.
- See more at: http://www.businesskorea.co.kr/article/10115/southern-strategy-dong-st-licenses-new-diabetes-drug-evogliptin-17-latin-american#sthash.liqwFTWU.dpuf 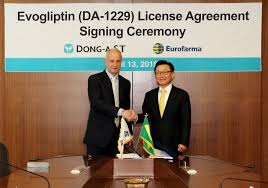 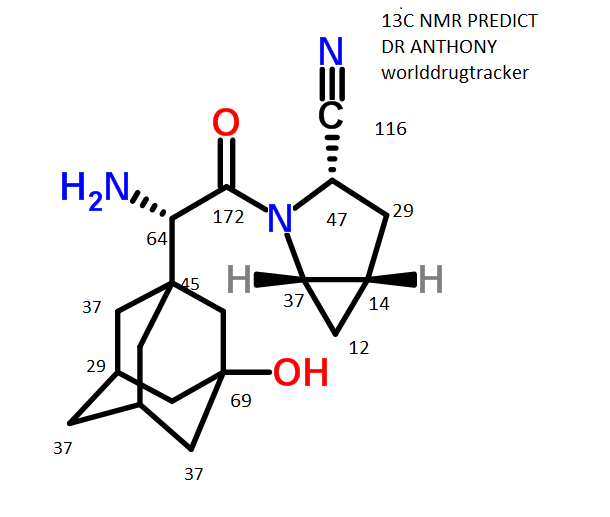 is a dipeptidyl peptidase IV (DPP4) inhibitor. Saxagliptin is marketed under the trade name ONGLYZA® by Bristol-Myers Squibb for the treatment of type 2 diabetes.

The commercial-scale synthesis of the DPP-IV inhibitor, saxagliptin (1), is described from the two unnatural amino acid derivatives 2 and 3. After the deprotection of 3, the core of 1 is formed by the amide coupling of amino acid 2 and methanoprolinamide 4. Subsequent dehydration of the primary amide and deprotection of the amine affords saxagliptin, 1. While acid salts of saxagliptin have proven to be stable in solution, synthesis of the desired free base monohydrate was challenging due to the thermodynamically favorable conversion of the free amine to the six-membered cyclic amidine 9. Significant process modifications were made late in development to enhance process robustness in preparation for the transition to commercial manufacturing. The impetus and rationale for those changes are explained herein.
Monohydrate 1 was isolated as a white solid (58.2 kg, 88%). 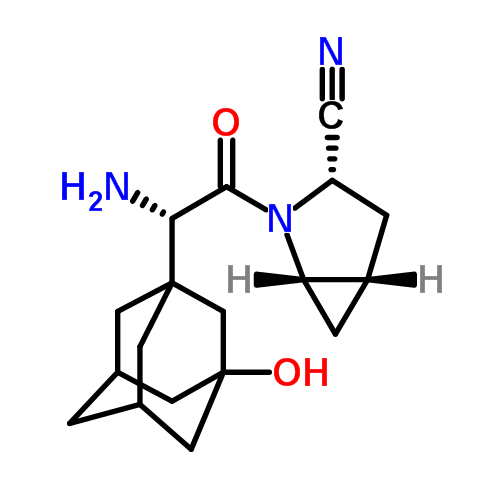 
P.S. : The views expressed are my personal and in no-way suggest the views of the professional body or the company that I represent.

Read all about Organic Spectroscopy on ORGANIC SPECTROSCOPY INTERNATIONAL

join me on Linkedin

join me on Researchgate

Join me on Researchgate

Carbanio– a digital revolution in the industry of buying and selling chemicals.